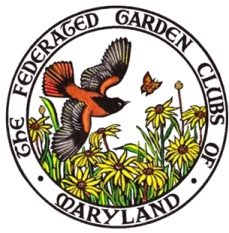 Since 1945, the Dickeyville Garden Club has been a member of the Federated Garden Clubs of Maryland.  In 1929 Maryland was one of sixteen charter states that organized into what is now the National Garden Clubs, Inc. Today the Federated Garden Clubs of Maryland is comprised of 112 garden clubs with approximately 4,000 members divided into five districts located throughout the state, from the Eastern Shore of the Chesapeake Bay to the mountains of Western Maryland.  Dickeyville is in District IV.

Throughout its history the FGCMD has played an important role in keeping Maryland roadsides clear of billboards, preserving and placing Blue Star Memorial markers on highways in honor of military service personnel and partnering with the Chesapeake Bay Foundation in plantings to protect critical watershed areas. It continues to support the preservation of historic properties such as Hammond-Harwood House in Annapolis and Historic Hampton in Baltimore County.  Most recently it has been involved in the development of the Vollmer Center at Cylbum Arboretum located in the city of Baltimore.

The FGCMD is in the Central Atlantic Region of National Garden Clubs, a nonprofit educational organization headquartered in St. Louis, Missouri, with approximately 200,000 members in over 6,000 clubs.

The Dickeyville Garden Club became a life member of Cylburn Arboretum in 2006.